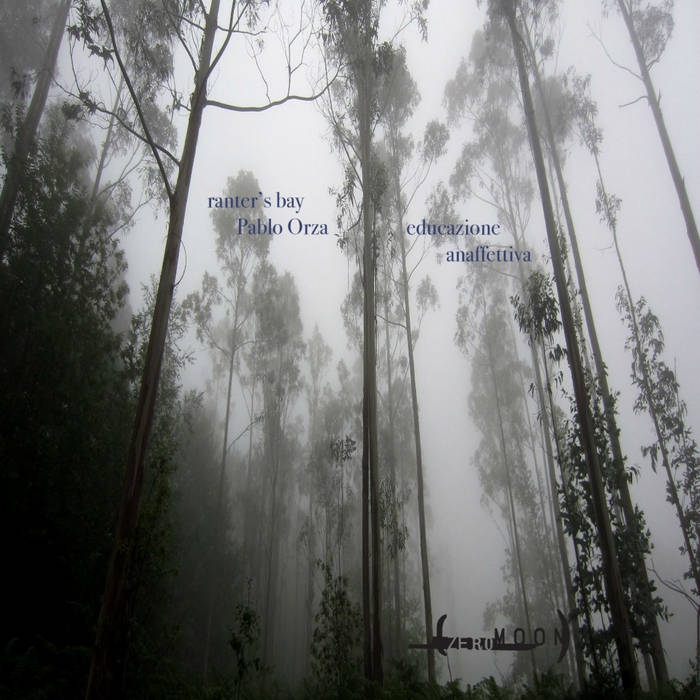 "Educazione anaffettiva" is the second album by ranter's bay and Pablo Orza and it was entirely improvised.
It develops as an anaffective dialogue between the analog instruments and the electronics.
The intention was to play a slow, introspective music in contrast with the velocity of today's life.

Pablo Orza is a visual artist and self-taught multi-instrumentalist from Galicia, Spain, mainly interested in free improvisation. In 2003 he has collaborated with Parto Duo to create the Centro de Novas Tecnoloxías do Pico Sacro (TPS), an artist collective interested in real time creation. Between 2006 and 2010 the TPS programmed regular events focusing on free improvisation: the Sesións Vibracionais do TPS in collaboration with the NASA venue (Santiago de Compostela). The improvisers from Spain & Europe that took part in this work eventually founded the Orquestra de Música Espontánea de Galicia (OMEGa) in 2007 and the TPS Vibrational Festival in 2009 and 2011.
Pablo has attended several workshops (Eddie Prevost, Seijiro Murayama, Wade Matthews…) and played with many other improvisers in different projects. In 2012 he started to collaborate with 23RedAnts which is, nowadays, his most stable project besides his solo performances. He uses voice, objects & prepared electric guitar to explore an abstract approach into sound production (electroacoustic, drone, minimalism, noise…) through the unpredictable flux of dynamics and events that is free improvisation music.
pabloorza.wordpress.com

ranter’s bay is the solo project by Niet F-n, sound artist, experimenter, improviser born in Tuscany, Italy, in 1978.
Focused on the multiple possibilities of sound he works in different fields. Besides his work as electronic musician with different projects, he has Collaborated in the music for the theatrical performances by Licenciada Sotelo and Marco Regueiro in Spain and by Mending Dance Theatre in Taipei. He also played the music for the exhibits of artists such as Prof. Bad Trip (IT), Pablo Orza (ES) and Frank Breidenbruch (DE). Artist in residence at Laznia center of Contemporary Art in Gdansk (PL), has collaborated, within the project "Miastofon" by Gruby Punkt, in the creation of a subjective sound map which was selected to participate at Post Screen, international festival of art, new media and cybercultures in Lisbon (PT) and at Espacio Enter Festival in Tenerife (ES). During this time he has performed in different independent festivals such as "Sinfonie per appartamenti”, “WOS Festival” or "ALT festival" in Spain and abroad. He also builds his own instruments through the practice of circuit bending. In the last years he has released several works on label and netlabel worldwide.
All his works are released under a Creative Commons music license as he believe in free culture.
nietfn.weebly.com