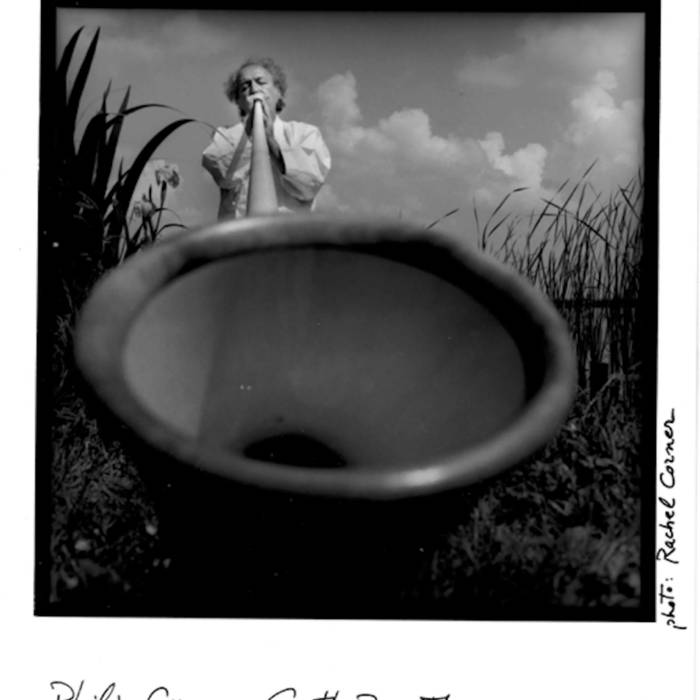 ALPHORN IN THE ALPS, WITH WATER AND METAL

5 solos from a weekend in September 1994 at Arte Sella, an outdoor art festival in Borgo Valsugana, Italy----towards the end of a near 20yearlong period of a daily personal spiritual practice with music; though using a variety of media they fit into the general series of improvisations i called Withinstascys----of which the constant is a willed absence of prethought ideas, keeping the body-mind in a moment-to-moment awareness of present ârightnessâ. (This possessed me so completely that for many years i did little else, and so very few written compositions from that time.)

The alphorn itself was ordered from Beat Collegger in Alvaneu-Dorf in Switzerland; first played for an event by Alain Gibertie, the many subsequent performance-improvisations subsumed in the concept EarthBreath......building upon previous experience as a trombone player.

Gong/Ear freely combined with, initially (and even now) a meditation with my âtam-tamâ, flat type gong manufactured by Paiste, or another appropriate resonant metal instrument: in this case the pair of Korean shaman cymbals given to me by Mr. Ho-sun Cheon when he was cultural attachÃ© to Denmark. The core idea is the aural sensitivity which creates a loop back from the music-making action by its perception to a further continuation of that acting; this may pass through an ideal listener who may be a dancer whose vibration-inspired movements render visible the sound-continuity.

All these performance within the sound of a running stream.

Philip Corner (b. April 10, 1933, Bronx, New York). American composer, now resident in Italy, of interdisciplinary works that have been performed throughout the world; he is also active as a performer, visual artist and writer.

He was drafted into the US Army in 1959 and shipped to South Korea in 1960â61, where he introduced music by himself, as well as John Cage, Olivier Messiaen, Wallingford Riegger, Anton Webern, and other composers. While there, he also studied calligraphy with Ki-sung Kim. He has participated in various concerts, exhibitions and festivals with the name Fluxus since 1961.

As a performer of new music, he has been active as a pianist, trombonist and vocalist and has also played Alphorn and various natural objects, including resonant metals. He served as a resident composer and musician to the Judson Dance Theatre in New York from 1962â64. With Malcolm Goldstein and James Tenney, he co-founded the Tone Roads Chamber Ensemble in 1963, a new music group that performed until 1970. He co-founded with Julie Winter the music-ritual ensemble Sounds out of Silent Spaces in 1972 and with Barbara Benary and Daniel Goode Gamelan Son of Lion in 1976 and often played with both, as well as with the Experimental Intermedia Foundation in New York.

He is featured in the book The Four Suits (1966, Something Else Press) and an overview of his life and work is presented in the book LifeWork: A Unity (1991â93, Frog Peak Music). As a writer, he has written numerous articles, essays and poems, and his major publications include the book I Can Walk through the World as Music (1966, unpublished; 1980, Printed Editions).

He has also used the Korean name Gwan Pok â Contemplating Waterfall on occasion. He is married to the dancer Phoebe Neville, with whom he has often collaborated, and has lived in Italy since 1992.