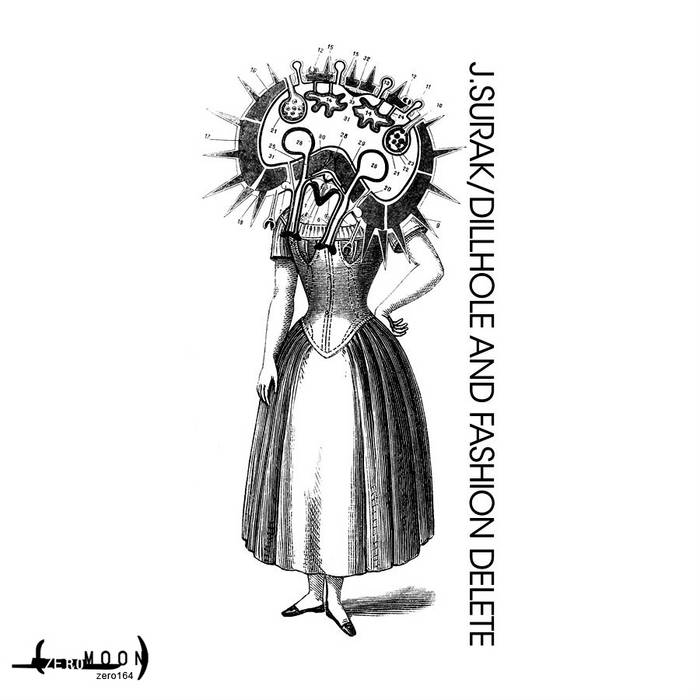 A singular dark vision propelled by an electronic turbine of sound punctuated with hallucinogenic angelic drones.

"Two grisly episodes of slow-burning torture noise from Jeff Surak on his cassette tape Dillhole And Fashion Delete (ZEROMOON ZERO164). On side one he passes the subject through an experience resembling a body-scan device of some sort, except that this infernal machine is not for medicinal healing purposes and instead inflicts the victim with germs, diseases, and corpuscle-destroying entities. Once completed, you’ll be a ghost of your former self, lucky if you can shake hands with your own reflection. An exquisite low-key whine of sinister proportions, for sure. One side two we’re in a distinctly urban-industrial outdoor scenario, involving what may be a fruit-canning machine that’s in the business of parcelling what’s left of our bodies into food for the remaining populace. This side undergoes many changes presenting several ingenious nightmares of minimal electronic Hell, presenting an impassable facade of grim, unknowable horrors. Last heard from this Maryland stern-faced noisedroner in 2014 with his supernatural tapes Skull Cloud and Harmonium Bacterium; we always enjoy his restrained yet unwavering approach, fearlessly exploring dark zones of implied violence and subdued terror."
The Sound Projector

"It's been a while, I must admit, that I last heard new music by Jeff Surak. Years and years ago I was in contact with him a lot, about his group New Carrollton and his solo outing, 1348, and then, again later, when he called himself Violet or even just V. Besides that he plays with many others, runs the Zeromoon label and curates the Sonic Circuits festival in Washington DC. As said, in recent years I heard a lot less of his music, but here's a new one and Surak writes that the music was made using "synthesizers, califone record player and a humidifier". There is no information on the cover, no track titles, nothing, so the whole thing looks a bit obscure. I can't say if Surak intended this to be two different pieces, or perhaps there are more pieces, extending beyond one per side. It sounds like one piece per side to me. Surak takes the listener on quite a nice trip, which is like ebb and flow, ranging from all things nearly quiet to extremely loud. Everything, from synthesizers to humidifier, is set to drone out in a very dramatic way. It's like coming from a far away distance, and hearing only the faintest of sounds of a motor and slowly one is pushed towards that very motor and it's almost like one is pushed into that motor. But not quite so, as just before that happens the sound is cut out and then we move to the other side of the tape, which is more spacious, weightless like a rusty space ship making it's turns around planet P (they ran out of names in that particular part of the solar system), while bugs slowly eat the interior, the califone record player spinning records. Surak has a fine tape here, blending various elements from the world of cosmic music together with the more noisy and industrial music in an excellent way."
(FdW) ~ Vital Weekly