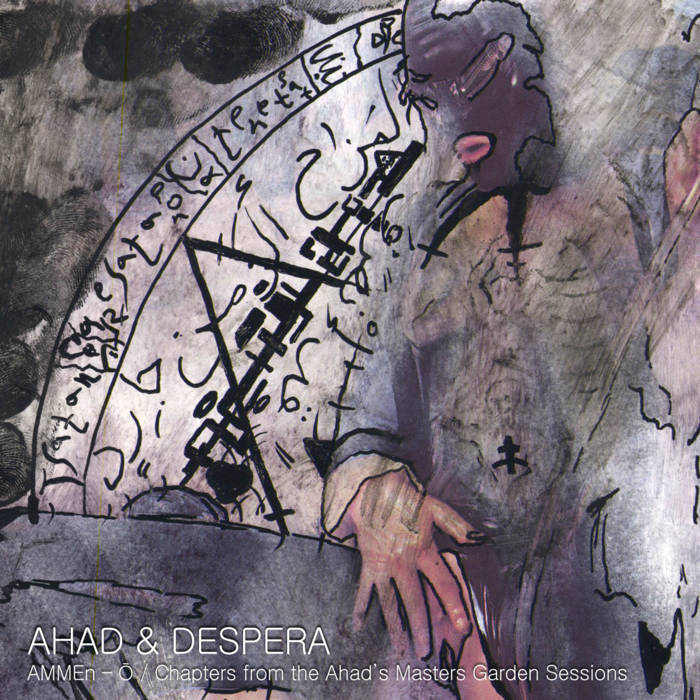 The music was analogue tape recorded in mono by Despera in Budapest, September (track 1-6.) and on the “Ahad’s Masters Garden I.: Shapeshifting” live concert in Bp. at the music club West Balkan, 17th December, 2007 (track 7.). Edited and pre-mastered by Despera at Worstward Records in Tokyo, 2008. Post-mastered by Ahad in Budapest, April, 2010.

Track 1.: [Emma-o:] “The Japanese Buddhist god of the underworld (from the Sanskrit Yama ). He lives in the Yellow Springs under the earth in a huge castle all covered in silver and gold, rosy pearls and other jewels. He is the judge of the dead and notes the sins of those who are sentenced to purgatory, and decides the degree of their punishments according to Buddha’s Law. Anyone who has killed an innocent will be thrown into a boiling cauldron full of molten metal. However, if they have made a pilgrimage to each of the 33 shrines of the goddess of mercy Kannon, then all the evil they have done will disappear. Sometimes he is portrayed less pitiless and returns life to those who appear before him. On the last day of the Festival of the Dead, the sea is full of shoryobuni (“soul ships”), for on that day the high tide brings a flood of returning ghost who go back to their spirit world. The sea is luminescent with the light these souls emit, and their whispering can be heard. While the ghosts are embarking, no human ship should come near. Should one stray into the soul-covered sea, the ghosts will ask for pails. The sailors should only offer them pails without bottoms, for if they do not, the ghosts will sink their ship. Currently, Emma-o is used as a bogeyman to scare little children.” (Micha F. Lindemans, www.pantheon.org/articles/e/emma-o.html)
Track 2.: Improvisation on a theme from “Ahad’s Masters Garden I.: Shapeshifting”. Rrose Selavy aka Marcel Duchamp: “Anemic Cinema” (1926) is the first part of Ahad’s film soundtrack project “AMG I.: Shapeshifting”. Duchamp’s original film is a silent movie.
Track 3-5.: A famous Japanese Buddhist text, the Ojoyosho«, or “Essentials of Birth in the Pure Landâ was written before 986 by a monk of the Tendai sect named Genshin. The Ojoyosho« reads in many ways like Dante’s Inferno, where Genshin depicts various kinds of Buddhist hell realms, where various types of cruel and selfish actions are punished. In keeping with Buddhist theology, the hell realms are not permanent states of rebirth, but one can stay there for a very, very long time before being reborn again. “The Hell of Retribution and Justice”, where one dwells for 12,500,000 years for destroying life or eating meat and people here are pummeled by demons into mincemeat; “The Hell of the Black Rope”, where murderers and thieves are flogged with whips of fire and cut with burning axes; “The Hell of Unlimited Suffering”, where the worst of the worst go: Devadatta, who tried to kill the Buddha a number of times, and split the early monastic community, is said to dwell here, but one day he too will be a Buddha though.
Track 6.: Revelation 6:8
Track 7.: Alexander Hammid: “The Private Life of a Cat” (1944) is the third part of Ahad’s film soundtrack project “AMG I.: Shapeshifting”. Hammid’s original film is a silent movie.